In the previous module, we saw that we could avoid tracking the positions of individual particles if we assume that the particles are well-mixed, i.e., uniformly distributed throughout their environment. We will apply this assumption in our current work as well, in part because the E. coli cell is so small. As a proof of concept, we will see if a well-mixed simulation replicates a reversible reaction’s equilibrium concentrations of particles that we found in the previous lesson.

Note: The difficulty posed to precise analysis of systems with multiple chemical reactions is comparable to the famed “n-body problem” in physics. Predicting the motions of two celestial objects interacting due to gravity can be done exactly, but once we add more bodies to the system, no exact solution exists, and we must rely on simulation.

Our particle-free model will apply an approach called Gillespie’s stochastic simulation algorithm, which is often called the Gillespie algorithm or just SSA for short. Before we explain how this algorithm works, we will take a short detour to provide some needed probabilistic context.

The Poisson and exponential distributions

Imagine that you own a store and have noticed that on average, λ customers enter your store in a single hour. Let X denote the number of customers entering the store in the next hour; X is an example of a random variable because its value may change depending on random chance. If we assume that customers are independent actors, then X follows a Poisson distribution. It can be shown that for a Poisson distribution, the probability that exactly n customers arrive in the next hour is

Note: A derivation of the above formula for Pr(X = n) is beyond the scope of our work here, but if you are interested in one, please check out this article by Andrew Chamberlain.

Furthermore, the probability of observing exactly n customers in t hours, where t is an arbitrary positive number, is

STOP: What is the probability Pr(T < t)?

Numerical methods allow us to generate a random number simulating the wait time of an exponential distribution. By repeatedly generating these numbers, we can obtain a series of wait times between consecutive reaction occurrences.

As illustrated in the figure below, we will demonstrate the Gillespie algorithm by returning to our ongoing example, in which we are modeling the forward and reverse reactions of ligand-receptor binding and dissociation. These reactions have rates rbind = kbind · [L] · [T] and rdissociate = kdissociate · [LT], respectively.

First, we choose a wait time according to an exponential distribution with mean value 1/(rbind + rdissociate). Then, the probability that the event corresponds to a binding reaction is given by

and the probability that it corresponds to a dissociation reaction is 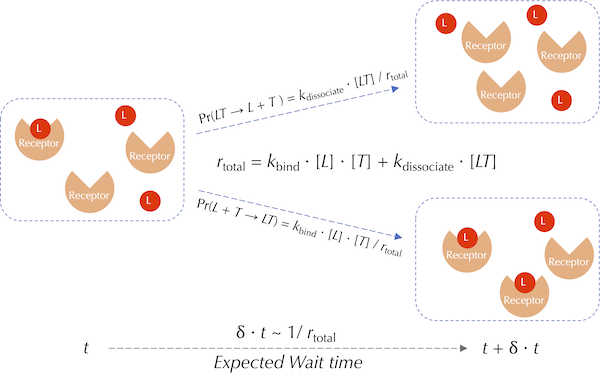 A visualization of a single reaction event used by the Gillespie algorithm for ligand-receptor binding and dissociation. Red circles represent ligands (L), and orange wedges represent receptors (T). The wait time for the next reaction is drawn from an exponential distribution with mean 1/(kbind + kdissociate). The probability of this event corresponding to a binding or dissociation reaction is proportional to the rate of the respective reaction.

To generalize the Gillespie algorithm to n reactions occurring at rates r1, r2, …, rn, the wait time between reactions will be exponentially distributed with average 1/(r1 + r2 + … + rn). Once we select the next reaction to occur, the likelihood that it is the i-th reaction is equal to

Throughout this module, we will employ BioNetGen to apply the Gillespie algorithm to well-mixed models of chemical reactions. We will use our ongoing example of ligand-receptor binding and dissociation to introduce the way in which BioNetGen represents molecules and reactions involving them. The following tutorial shows how to implement this rule in BioNetGen and use the Gillespie algorithm to determine the equilibrium of a reversible ligand-receptor binding reaction.

Does the Gillespie algorithm confirm our steady state calculations?

In the previous lesson, we showed an example in which a system with 10,000 free ligand molecules and 7,000 free receptor molecules produced the following steady state concentrations using the experimentally verified binding rate of kbind = 0.0146((molecules/µm3)-1)s-1 and dissociation rate of kdissociate = 35s-1:

The figure below demonstrates that the Gillespie algorithm quickly converges quickly to the same values calculated just above. Furthermore, the system reaches steady state in a fraction of a second. 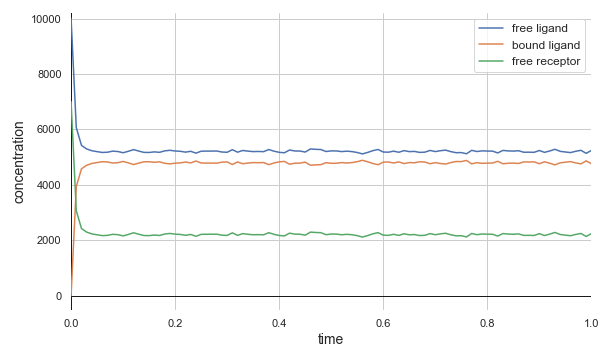 A concentration plot over time for ligand-receptor dynamics via a BioNetGen simulation employing the Gillespie algorithm. Time is shown (in seconds) on the x-axis, and concentration is shown (in molecules/µm3) on the y-axis. The molecules quickly reach steady state concentrations that match those identified by hand.

This simple ligand-receptor model is just the beginning of our study of chemotaxis. In the next section, we will delve into the complex biochemical details of chemotaxis. Furthermore, we will see that the Gillespie algorithm for stochastic simulations will scale easily as our model of this system grows more complex.