Transducing an extracellular signal to a cell’s interior

We now turn to the question of how the cell conveys the extracellular signal it has detected via the process of signal transduction to the cell’s interior. In other words, when E. coli senses an increase in the concentration of glucose, meaning that more ligand-receptor binding is taking place at the receptor that recognizes glucose, how does the bacterium change its behavior?

The engine of signal transduction is phosphorylation, a chemical reaction that attaches a phosphoryl group (PO3-) to an organic molecule. Phosphoryl modifications serve as an information exchange of sorts because, as we will see, they activate or deactivate certain enzymes.

For many cellular responses, including bacterial chemotaxis, a sequence of phosphorylation and dephosphorylation events called a phosphorylation cascade serves to transmit information within the cell about the amount of ligand binding being detected on the cell’s exterior. In this lesson, we discuss how this cascade of chemical reactions leads to a change in bacterial movement.

A high-level view of the transduction pathway for chemotaxis is shown in the figure below. The cell membrane receptors that we have been working with are called methyl-accepting chemotaxis proteins (MCPs), and they bridge the cellular membrane, binding both to ligand stimuli in the cell exterior and to other proteins on the inside of the cell. The pathway also includes a number of additional proteins, which all start with the prefix “Che” (short for “chemotaxis”). 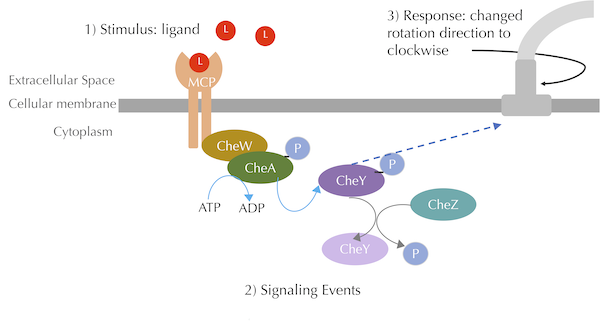 On the interior of the cellular membrane, MCPs form complexes with two proteins called CheW and CheA. In the absence of MCP-ligand binding, this complex is more stable, and the CheA molecule autophosphorylates, meaning that it adds a phosphoryl group taken from ATP to itself — a concept that might seem mystical if you had not already followed our discussion of autoregulation in the previous module.

Yet when a ligand binds to the MCP, the MCP undergoes conformation changes, which reduce the stability of the complex with CheW and CheA. As a result, CheA is less readily able to autophosphorylate, which means that it does not phosphorylate CheY, which cannot change the flagellar rotation to clockwise, and so the bacterium is less likely to tumble.

Note: A critical part of this process is that if a cell with a high concentration of CheY detects an attractant ligand, then it needs to decrease its CheY concentration quickly. Otherwise, the cell will not be able to change its tumbling frequency. To this end, the cell is able to dephosphorylate CheY using an enzyme called CheZ.

Adding phosphorylation events to our model of chemotaxis

We would like to use the Gillespie algorithm that we introduced in the previous lesson to simulate the reactions driving chemotaxis signal transduction and see what happens if the bacterium “senses an attractant”, meaning that the attractant ligand’s concentration increases and leads to more receptor-ligand binding.

This model will be more complicated than any we have introduced thus far. We will need to account for both bound and unbound MCP molecules, as well as phosphorylated and unphosphorylated CheA and CheY enzymes. We will also need to model CheA phosphorylation reactions, which depend on the current concentrations of bound and unbound MCP molecules. We will at least make the simplifying assumption that the MCP receptor is permanently bound to CheA and CheW, so that we do not need to represent these molecules individually. In other words, rather than thinking about CheA autophosphorylating, we will think about the receptor that includes CheA autophosphorylating.

But does higher attractant concentration in our model really lead to a lower concentration of CheY? Let’s find out by incorporating the phosphorylation pathway into our ligand-receptor model in the following tutorial. 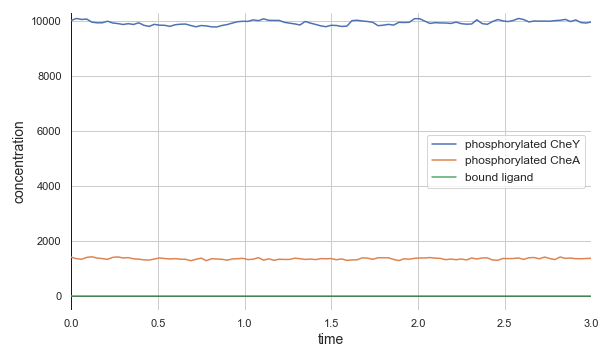 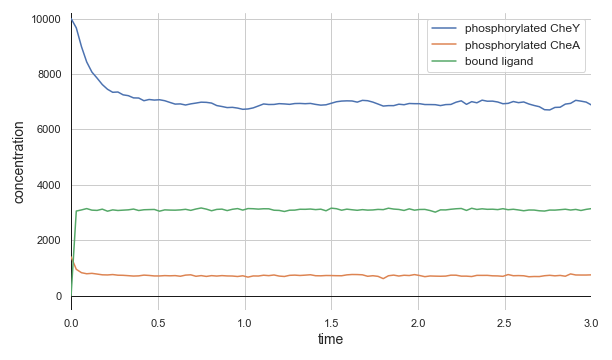 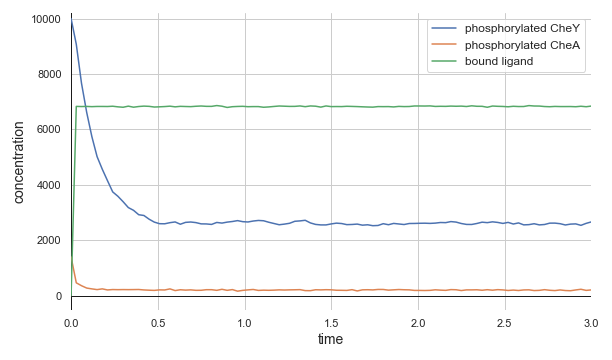 This model, powered by the Gillespie algorithm, confirms the biological observations that an increase in attractant reduces the concentration of phosphorylated CheY. The reduction takes place remarkably quickly, with the cell attaining a new equilibrium in a fraction of a second.

The biochemistry powering chemotaxis may be elegant, but it is also simple, and so perhaps it is not surprising that the model’s particle concentrations reproduced the response of E. coli to an attractant ligand.

But what we have shown in this lesson is just part of the story. In the next lesson, we will see that the biochemical realities of chemotaxis are more complicated, and for good reason — this added complexity will allow E. coli, and our model of it, to react to a dynamic world with surprising sophistication.