Photons are massless particles carrying electromagnetic radiation. In the sun’s core, photons are created as the result of nuclear fusion when two hydrogen atoms crash together and form a helium atom. The photons that are released have a great deal of kinetic energy, traveling at the speed of light (approximately 300,000,000 m/s). However, the atoms in the center of the sun are densely packed together, and so just like proteins in the cytoplasm, photons constantly bounce off atoms and follow random walks.

Exercise: On average, what is the length of each step of a solar photon’s random walk? That is, based on a mean free path of 1 cm, what is the typical time between collisions for a given photon traveling at the speed of light?

When you feel the warmth of sunshine, the photons colliding with your skin have traveled from the sun in just eight minutes. But how long did these photons take to reach the surface of the sun in the first place?

Exercise: Use the Random Walk Theorem to approximate the number of steps that it will take for a photon to reach the sun’s corona from its center, given that the sun has a radius of 700,000 km. Then, use your solution to the previous exercise to estimate the expected time required for this journey.

Earlier in this module, we showed a grid of cells containing concentrations of two particles A and B that start with concentration equal to 1 in the central square and diffuse according to the rates dA = 0.2 and dB = 0.1. In a “STOP” question, we asked you to update this grid, reproduced below, after another time step of diffusion. 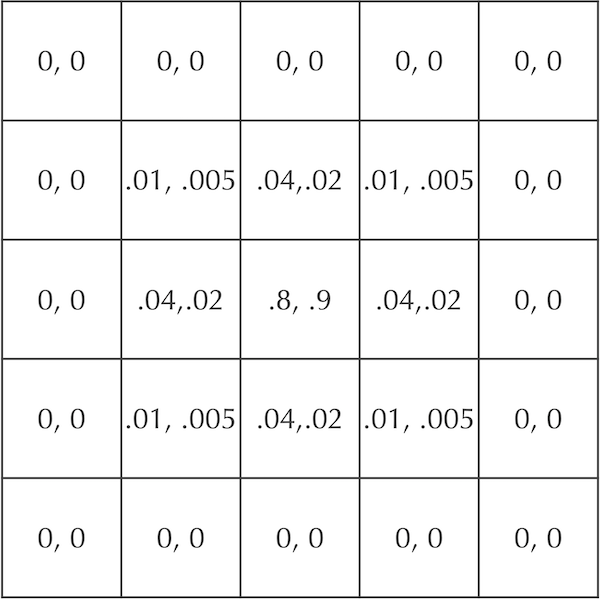 A figure showing cellular concentrations after one time step for two particles A and B that start at maximum concentration in the central square and diffuse at rates dA = 0.2 and dB = 0.1. Each cell is labeled by the ordered pair ([A], [B]).

Exercise: Instead of solely diffusing the particles, update the original grid (in which A and B have concentration equal to 1 in the central cell) for two time steps according to the Gray-Scott model. Use f = 0.03 and k = 0.1.

Both our particle simulator and the Gray-Scott model used a reaction A + 2B → 3B to represent a predator-prey dynamics of sorts. But there is no reason a priori why we would have used this reaction; instead, we could have modeled the simpler reaction A + B → 2B, in which a predator molecule collides with a prey molecule, and the prey molecule changes into a predator. Because this reaction only requires the collision of two particles, it would be more frequent than the reaction A + 2B → 3B if all else is equal.

Exercise: Adapt the particle-based simulation that we introduced earlier in a tutorial to replace the reaction A + B → 3B with A + B → 2B. Play around with the system’s reaction rate parameters; are you still able to generate Turing patterns?

Exercise: How would the simulation from the Gray-Scott tutorial need to change to model the reaction A + B → 2B instead of A + B → 3B? Make the appropriate changes to the implementation of the Gray-Scott model; do you still observe Turing patterns?

Recall the figure below, which shows how changing feed and kill rates affect Turing patterns. 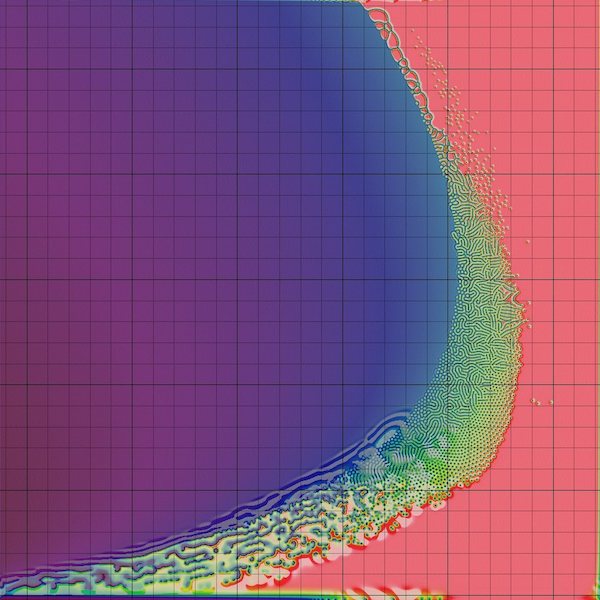 When we diffuse particles in the automaton model (including the Gray-Scott model), we did not mention what happens at the boundary of the simulation because we were interested in the patterns that arise in the interior of the grid. The simulations shown in the figures in this chapter assume that the automaton is surrounded by a “buffer” of invisible cells that have zero concentration. In this way, the particles leaving the board simply flow off the edges.

In the Gray-Scott tutorial, this was handled by the setting the parameter boundary='fill' to signal.convolve2d(). The boundary parameter could also take the additional options boundary='wrap' or boundary='symm' to represent the above two cases, which can be combined with the \texttt{‘fillvalue’} option as documented here.

Exercise: Adapt the simulation of the Gray-Scott model to handle each of these additional two cases. Do you see the same patterns arise?