In the main text, we noted that the center of some shapes can be computed mathematically. Consider the semicircular arc shown in the figure below, with endpoints (-1, 0) and (1, 0). 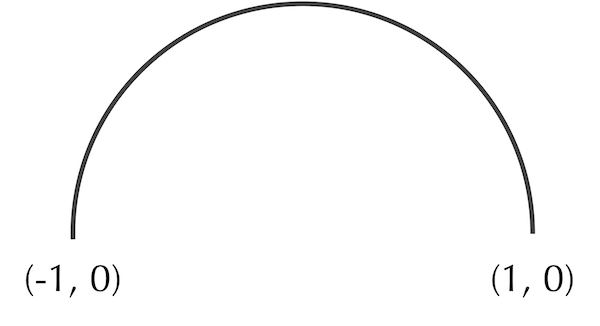 A semicircular arc with radius 1 corresponding to a circle whose center is at the origin.

Exercise: Say that we connect (-1, 0) and (0, 1) to form a closed semicircle. What will be the center of mass of the resulting shape?

Imagine that this plot depicts a 2D protein structure where each point represents an alpha carbon. 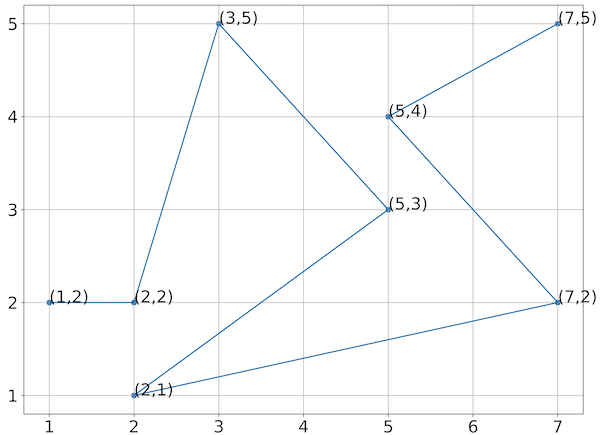 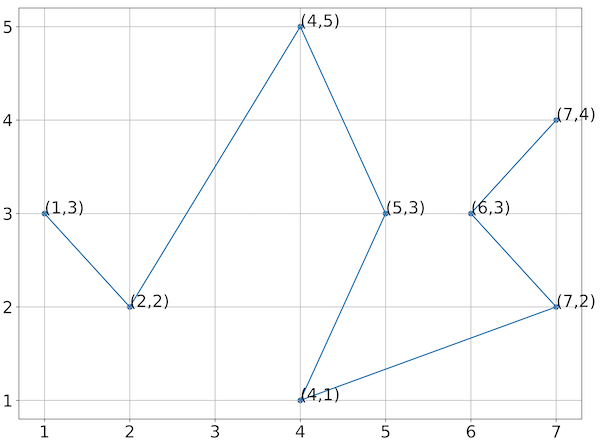 In this exercise, we will perform ab initio and homology structure prediction on a simple protein, the human hemoglobin subunit alpha we saw in part 1 of this module. First, go to the protein data bank and search for the protein “1SI4”. Download the PDB file by clicking on “Download Files” and then “PDB Format”. We will use this file for structure comparisons later. Next, go to the “Sequence” tab and click “Display Files” and then “FASTA Sequence”. Copy the first sequence corresponding to the alpha subunit and submit it to the ab initio structure prediction software, QUARK, and your choice of homology modeling software: SWISS-MODEL, Robetta, or GalaxyWEB. Once you get the results, use ProDy to calculate the RMSD between the predicted structures and the actual structure (1SI4).

Exercise: Which type of modeling resulted in the most accurate prediction? Is this what you expected? (Hint: Use “Chain A” to focus on subunit alpha)

In the conclusion of part 1 of this module, we introduced AlphaFold from DeepMind that won the 14th CASP contest in 2020 by a wide margine. A simplified version of AlphaFold is available on Colab. This version currently does not work with the entire spike protein, so we will use the human hemoglobin subunit alpha once again. Following the directions from the previous exercise, grab the protein sequence of the alpha subunit. Next, open the simplified version of AlphaFold. Read the documentation and follow the directions in each step to generate the predicted structure.

Exercise: Use ProDy to calculate the RMSD between the predicted structure and the actual structure (1SI4). Did this simplified version of AlphaFold perform better than your Ab initio and homology modeling results from the previous exercise?

Exercise: Use the visualizations to determine where the protein structures vary the most? Why do you think this makes sense?

Optional: Take the best performing predicted model from the previous exercise perform the Qres visual analysis with the actual human hemoglobin subunit alpha structure 1SI4. Where do the protein structures vary the most? Compare the predicted model with the mako shark hemoglobin 3MKB. Where do the structures vary the most, and are the results similar to the comparison between 1SI4 and 3MKB?

In this exercise, we will be performing a short analysis of SARS-CoV-2 Spike protein interaction energy with the human receptor ACE2 using NAMD. Go to the protein databank and download 6VW1.pdb. Upload the structure into VMD and go to Extension/Analysis/NAMD Energy. Calculate the energy types “VDW” and “Elec” using the following selections:

Exercise: How do the results of part A compare with that of part B? Can you justify the results? (Hint: Visualize the specific residues).

Note: For help, visit the module tutorials for VMD visualization and NAMD Energy. For additional troubleshooting/workaround, download NamdEnergyAssignment.zip and follow the README.txt.

In the conclusion of part 2 of this module, we mentioned that the surface of the surface of viruses and host cells are “fuzzy” because they are covered by structures called glycans. As you may expect, SARS-CoV and SARS-CoV-2 are also covered by this “glycan shield”, where glycosylation of surface antigens allows the virus to hide from antibody detection. In this simple exercise, we will use VMD to visualize glycans on the spike protein of both viruses. First, we will need to download the protein sturctures of the SARS-CoV spike protein (PDB entry: 5xlr and the SARS-CoV-2 spike protein (PDB entry: 6vxx. Load each structure into VMD and go to Graphics>Representations. For VMD, there is no specific keyword to select glycans, so we will use a workaround using the keywords: “not protein and not water”. Create the representation and play around with the visualization. Assuming that all the non-proteins are glycans, which structure contains the most number of glycans? Do you think this supports SARS-CoV-2’s higher infectivity compared to SARS-CoV?

“Thus, gap-filled alignments focusing on low RMSDs, while accurate and useful for superposition of structures, are sub-optimal for machine learning as the features of many potentially relevant residues are discarded due to a lack of data in those positions. In most cases, positions with over a certain percentage of aligned residues are considered, with gaps replaced by zeros or by the average of the feature values in that position [22].”

First, calculate the RMSD between the two models by following the RMSD tutorial and using the chain A to chain A matching (matches[0][0] & matches[0][1]). You should get a RMSD of about 2.5853.

If you followed the tutorial, robetta4 should be under the variable struct1. We will create a new variable, struct3, by taking the sequence of robetta4 and deleting a large selection. We can create the variable by using:

We use a large value ‘20000’ to ensure that the rest of the protein is captured. Variable struct3 will represent the robetta4 model that has a gap/deletion at residue 400 to 600 (a 200 residue gap). Now we will repeat the RMSD calculation using struct3 instead of struct1. You should get a RMSD of about 2.1927. Is this what you expected?

(There are less residues to compare and deviations to consider, which may have attributed to the decreased RMSD score.)

Here, we will show how to visualize glycans in VMD. Be sure to have installed VMD and know how to load molecules into the program. If you need a refresher, go to the VMD and Multiseq Tutorial. In the Visualizing Regions and Residues Tutorial, we went over how to change the visualizations of molecules and proteins in VMD. Please visit that tutorial first if you have not done so already.

We will use the PDB entry of the SARS-CoV-2 Spike protein, 6vyb.

First, download and load 6vyb into VMD and go to Graphics>Representations. For VMD, there is no specific keyword to select glycans. A workaround is to use the keywords: “not protein and not water”. To recreate the basic VMD visualizations of the glycans in the module, use the following representations. (For the protein chains, use Glass3 for Material). 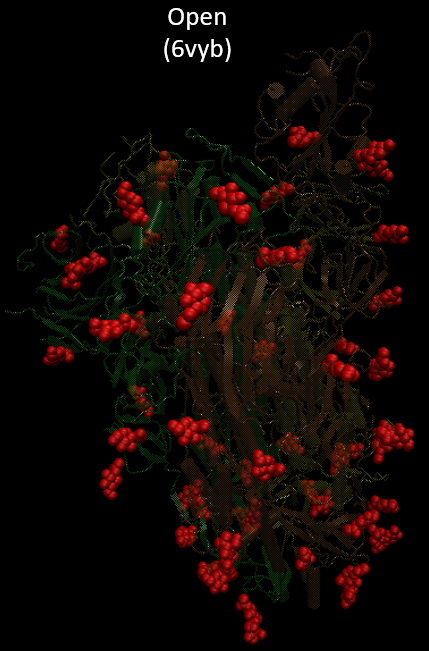 In the visualization you just created, the three chains in the S protein are in dark green, dark orange, and dark yellow. The presumed glycans are shown in red. Notice how they are all over the S protein! You may have noticed that one of the chains appear to be different in that part of it is sticking out from the rest of the protein. This is because this the PDB entry 6vyb contains the structure of the SARS-CoV-2 S protein in its open conformation. Let’s return to the main text to see what that means.